03.08.2020
15 - Comments
Visual Studio Sucks Dev C++ Average ratng: 6,6/10 4854 votes
I too am a beginner. Thus far I have tried Borland, MS Visual Studio 2008 Express Edition, and Dev-C++.
I didn't like Borland at all. I felt the interface was cumbersom to use. Also, the editor did not indent as I wanted. And the straw that broke the camels back was that code I had written that worked on MS VS 2008 ED and Dev-C++ didn't always work on Borland.
MS VS 2008 has a great editor. It works perfectly for how I want my indents. It seems very good at pointing out where my mistakes were also. The only flaw that I saw was that in order to run the programs it produces you had to install the runtime components, which in my opinion makes it more difficult to distribute. I also noticed that typically speaking, the console programs created with MS VS 2008 were substantially smaller than that of Dev-C++ though I don't care if my console program is 400k instead of 30k.
Dev-C++ is fairly good at telling you where your problems are but not as good as the MS option. The editor also doesn't indent as I would like however I am getting used to doing this myself. So far, all the programs I have writtens have compiled on both the MS option as well as this so they both seem to do well there for me. With Dev-C++ you (as far as I have seen thus far) do not need to install any runtime components on the destination machine. Because of this, it has been my compiler of choice.
-->

My experience on Windows. Short of using Visual Studio, C support sucks. It’s impossible to setup Cygwin, TDM, GCC, MSYS1/2, CLANG, too much bureaucratic mumbo jumbo its obvious that it is just plain better to code on Linux.

As part of the Visual Studio Integrated Development Environment (IDE), Microsoft C++ (MSVC) shares many windows and tools in common with other languages. Many of those, including Solution Explorer, the code editor, and the debugger, are documented under Visual Studio IDE. Often, a shared tool or window has a slightly different set of features for C++ than for other languages. A few windows or tools are only available in Visual Studio Professional or Visual Studio Enterprise editions.

In addition to shared tools in the Visual Studio IDE, MSVC has several tools specifically for native code development. These tools are also listed in this article. For a list of which tools are available in each edition of Visual Studio, see C++ Tools and Features in Visual Studio Editions.

A project is basically a set of source code files and resources such as images or data files that are built into an executable program or library.

Visual Studio provides support for any project system or custom build tools that you wish to use, with full support for IntelliSense, browsing and debugging: 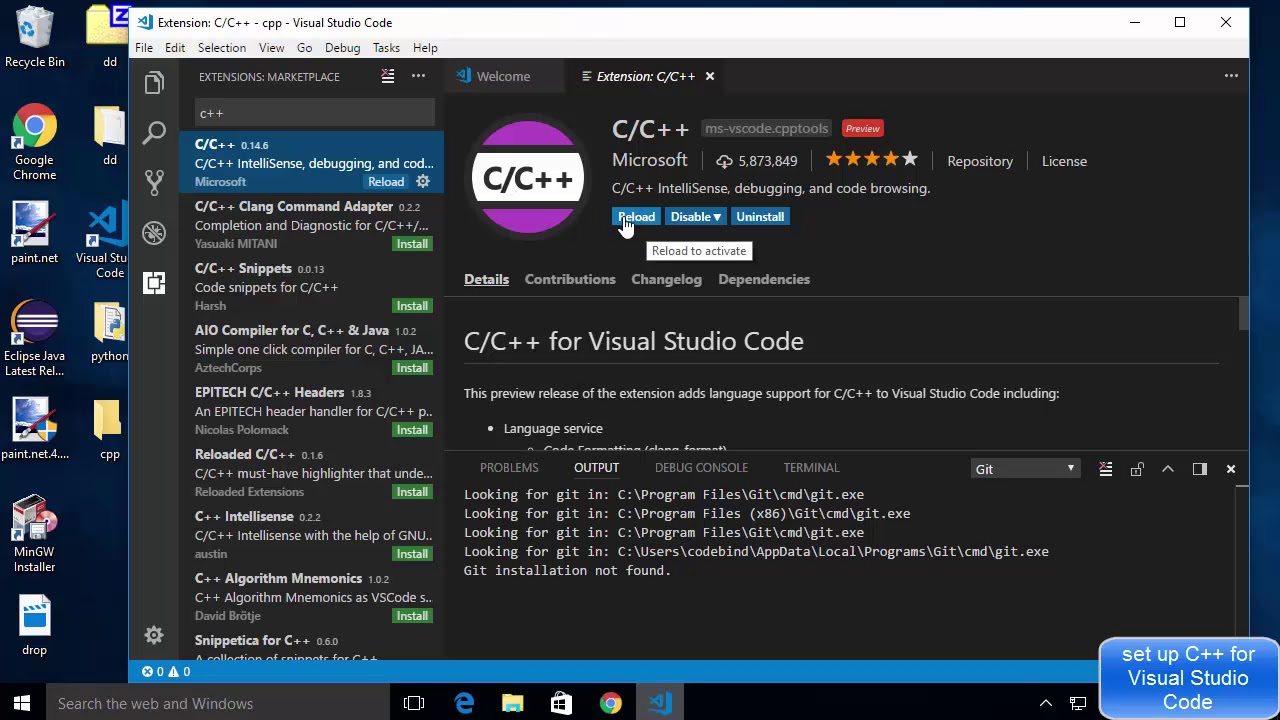 Use the vcpkg package manager to obtain and install third-party libraries. Over 900 open-source libraries are currently available in the catalog.

If your program has a user interface, you can use a designer to quickly populate it with controls such as buttons, list boxes and so on. When you drag a control from the toolbox window and drop it onto the design surface, Visual Studio generates the resources and code required to make it all work. You then write the code to customize the appearance and behavior.

For more information about designing a user interface for a Universal Windows Platform app, see Design and UI.

After you create a project, all the project files are displayed in the Solution Explorer window. (A solution is a logical container for one or more related projects.) When you click on a .h or .cpp file in Solution Explorer, the file opens up in the code editor.

The code editor is a specialized word processor for C++ source code. It color-codes language keywords, method and variable names, and other elements of your code to make the code more readable and easier to understand. It also provides tools for refactoring code, navigating between different files, and understanding how the code is structured. For more information, see Writing and refactoring code. 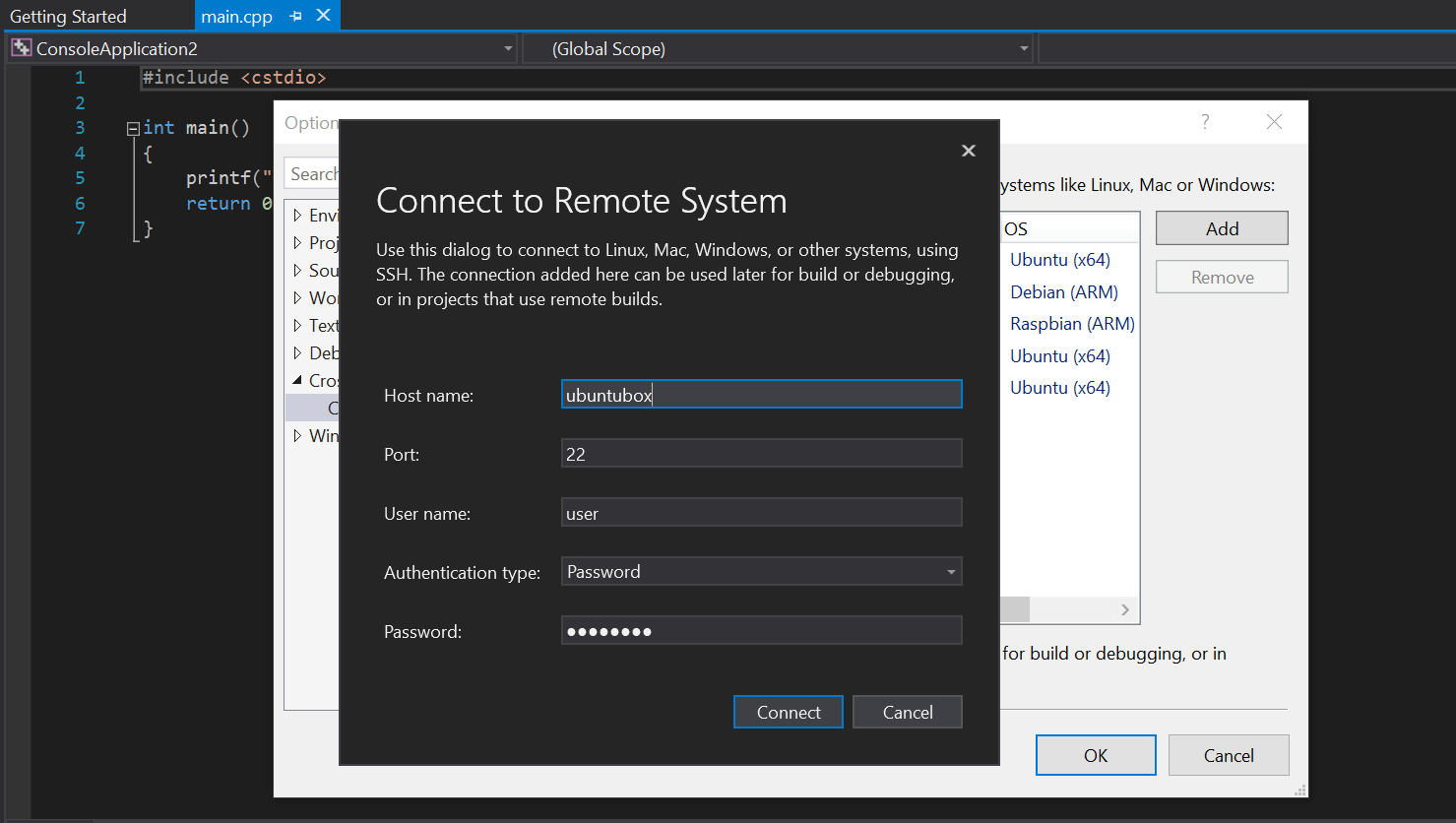 Choose Build > Build Solution on the menu bar, or enter the Ctrl+Shift+B key combination to compile and link a project. Build errors and warnings are reported in the Error List (Ctrl+, E). The Output Window (Alt+2) shows information about the build process.

For more information about configuring builds, see Working with Project Properties and Projects and build systems.

You can also use the compiler (cl.exe) and many other build-related standalone tools such as NMAKE and LIB directly from the command line. For more information, see Build C/C++ code on the command line and C/C++ Building Reference.

You can start debugging by pressing F5. Execution pauses on any breakpoints you have set (by pressing F9). You can also step through code one line at a time (F10), view the values of variables or registers, and even in some cases make changes in code and continue debugging without re-compiling. The following illustration shows a debugging session in which execution is stopped on a breakpoint. The values of the data structure members are visible in the Watch Window.

Visual Studio includes the Microsoft Unit Test Framework for C++, as well as support for Boost.Test, Google Test, and CTest. Run your tests from the Test Explorer window:

You can deploy both traditional desktop applications and UWP apps to customers through the Microsoft Store. Deployment of the CRT is handled automatically behind the scenes. For more information, see Publish Windows apps and games.

You can also deploy a native C++ desktop to another computer. For more information, see Deploying Desktop Applications.

For more information about deploying a C++/CLI program, see Deployment Guide for Developers,

Explore Visual Studio further by following along with one of these introductory articles: